I have lived in Penwortham for some 25 years, in three different houses, all within a mile of the Old Tram Way. Under COVID-19 Lockdown, I have walked a new section of it, which has prompted me to write this article. I will go through the history of it, but this is more about tracing where it used to go (and the canals too).

The tramway actually pre-dates the Railway Age, and is in fact a legacy of the canals. There was a plan to connect Kendal and Lancaster with Wigan, via Preston, with coal heading north and limestone south. Construction started in 1794, but, when it came to it, the finances were not enough to build an aqueduct across the Ribble valley, so an alternative scheme was devised.

This followed the ideas of an engineer called Benjamin Outram. It is likely the line was originally known as the Outram Way, and was later corrupted to Old Tramway. Outram devised a simple system of light wagons running on rails, pulled with horses (but had no direct impact on the tramway through Preston).

The tramway was originally built as a temporary measure, but the coming of the railways in 1831 led to a decrease in canal use, and the planned aqueduct across the Ribble never happened (and in fact the railway, by then the LNWR, took over the canal in 1885). The tramway remained in use until 1859.

There are some great pictures of the canal basin here. More information here. 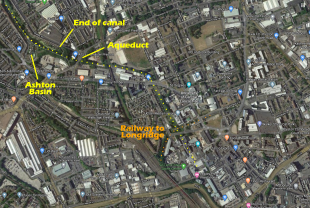 We will start at Ashton Basin, almost the most southerly point on the canal today, and follow the old course of the canal, however it is worth noting that it is a pleasant walk north from here. 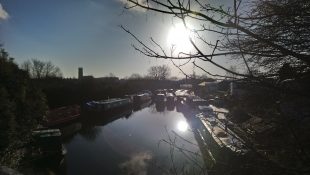 There is a short stub of canal from Ashton Basin to its current end. 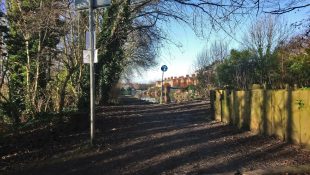 Just east of here there was an aqueduct across the road, and indeed the road is still called Aqueduct Street – the road the club rooms are on, in fact. The road through the aqueduct was so narrow it could barely fit a single vehicle, so it is no surprise that the Preston council truncated the canal and demolished it at the first chance it got. The link above has photos of both the aqueduct and the scene shortly after it had gone.

The canal continued through what is now light industry (and was mostly mills back then), its course just about traceable, until it turned southwards and crossed Fylde Road, where there is a short section that has been filled in and grassed over, behind the university. Towards the south of this section, it runs parallel to Cold Bath Street, notable as a one time home to Preston and District MRS! 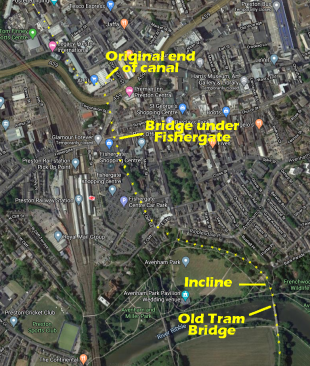 The canal then ducked under what used to be the railway to Longridge – the bridge is still there though nothing goes over or under it. To the east is the tunnel where the railway went under Preston. The tramway went under Maudland Road, and again the bridge is still there.  At this point, however, the course has been obliterated by more recent building. First the university, then the Legacy Hotel, and possibly the ring road too, to get to its original terminus approximately where Aldi, Poundstretcher and Abakhan are today. There was a complex interchange with the railway here too.

The tramway headed south, more or less where Corporation Street is now, before heading underneath Fishergate. This bridge is still there. It was later used, after widening, to give access to the railway goods yards that used to be where Fishergate carpark is (there is a photo here), and today it provides access to that car park. 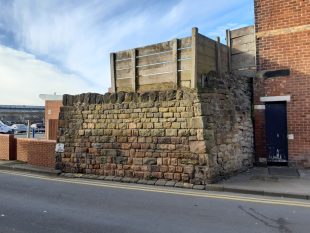 You can still see a bridge abutment in Garden Street, as shown above, indicating the tramway kept to the east edge of what is now the car park and presumably a few metres higher too. Interesting that opposite the abutment there is a terrace of houses that I would guess are well over 100 years old, confirming how long ago the tramway went out of use.

It passed the back of the terrace in East Cliff Road, as seen below.  The slate rooves at the back are the houses on Garden Street, with the Fishergate Centre behind them. 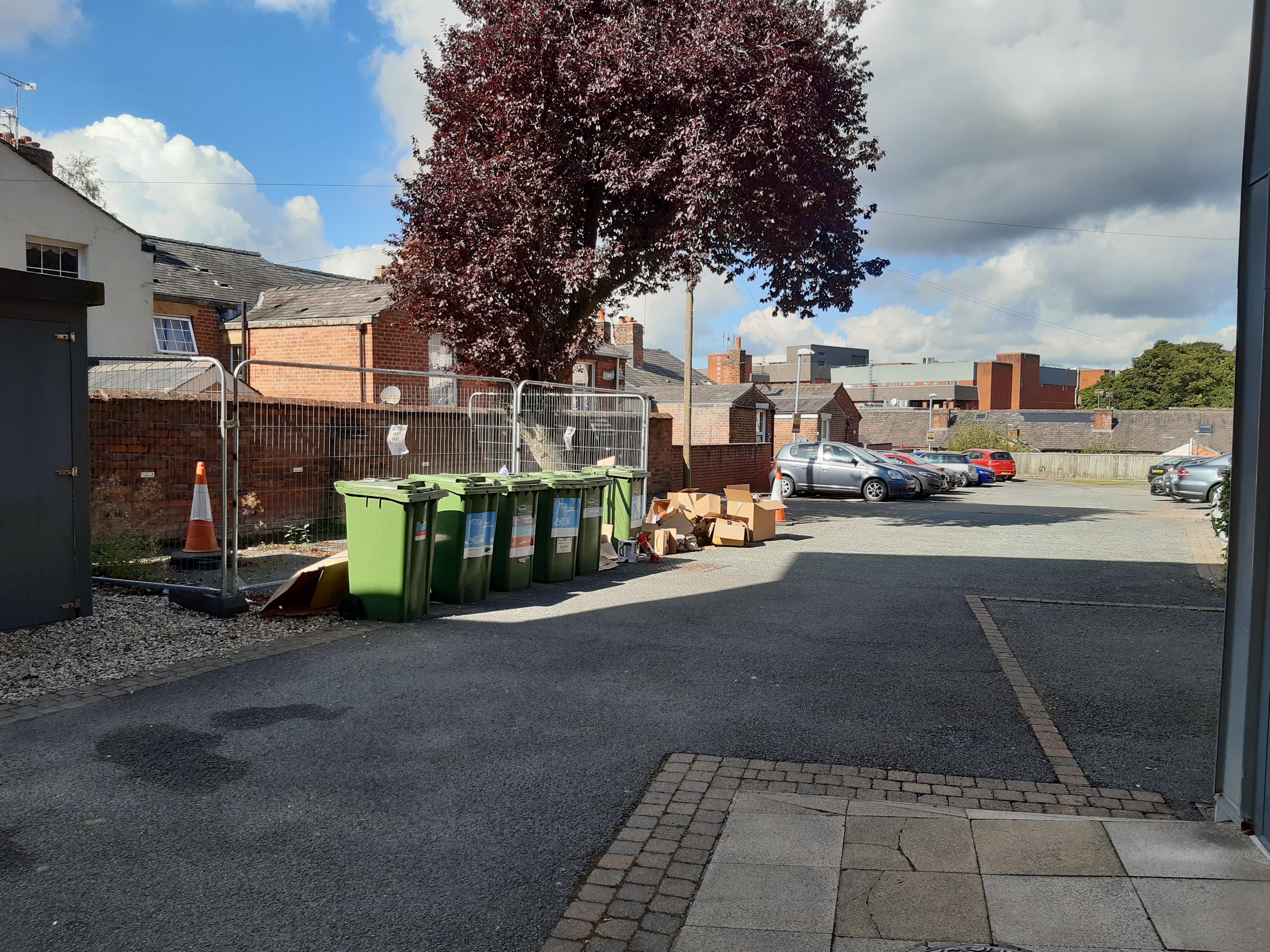 It crossed East Cliff, cutting between two fine old houses. The view below is taken from the same place as the one above, but looking south. I believe the tramway went through were the bricks are bright red, this wall being a later addition put in place once the tramway had gone. 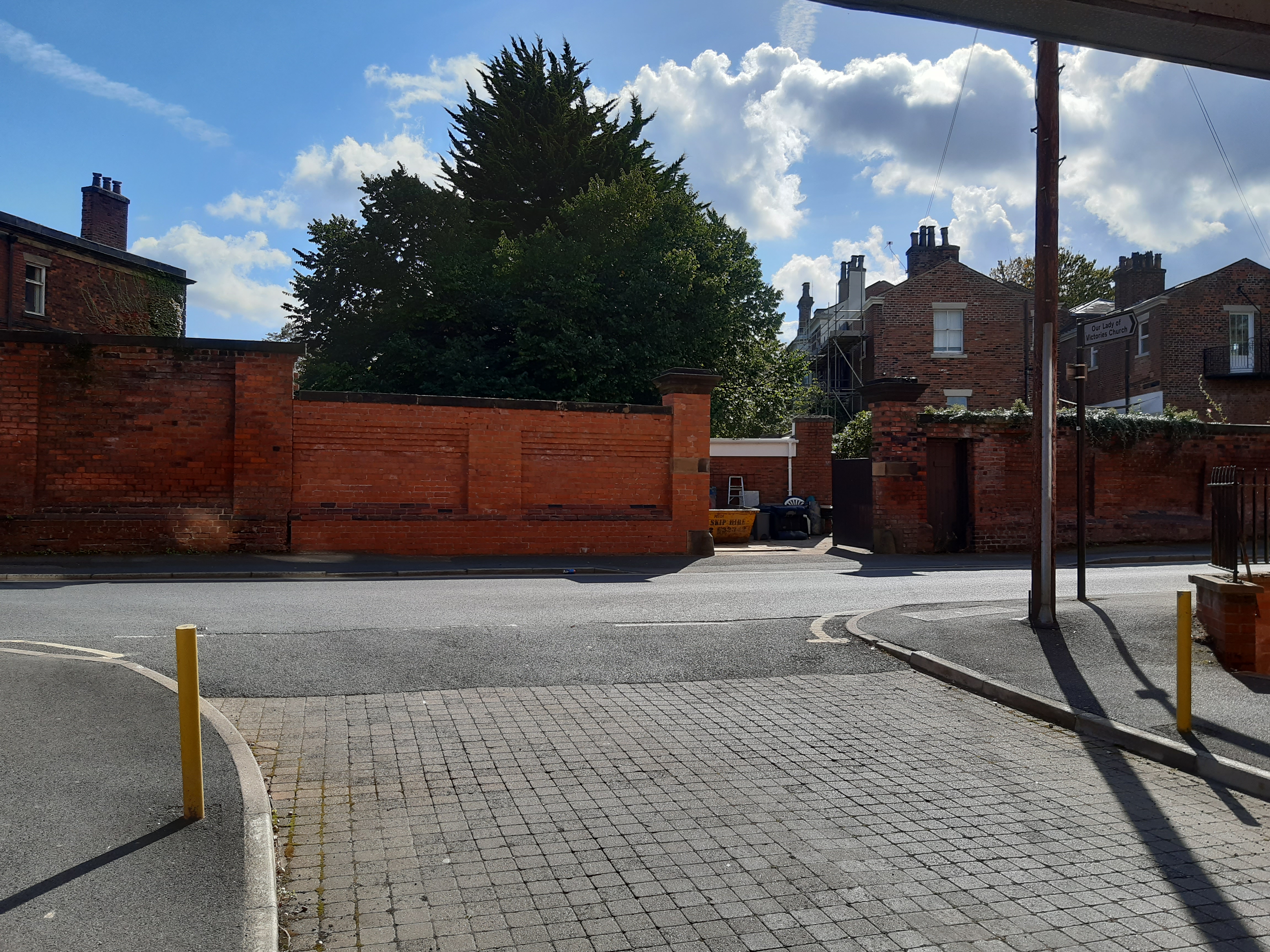 It skirted the top of what is now Avenham Park, along the footpath, to somewhere around the Belvedere, where a stationary steam engine was set up to haul wagons up the incline from the river. This had an overhead pulley system to which wagons could be attached, and seems to have had a fair number of incidents (as you can see here). A wagon that was victim to one such incident was many years later recovered from the river and now resides in the Harris Museum.

From the incline, the tramway crossed the river, on the Old Tram Bridge. This was a wooden structure that lasted well over a century. It was damaged in a storm in 1935, and bits of it replaced by concrete in the same style. The deck was removed during the war to stop German tanks (image here)! Presumably this was later replaced, and further replacements of the original wooden structure with concrete were made in the mid-sixties. It has recently been closed because it is unsafe and to judge by the investment in fencing, the council have no interest in repairing or removing it. There is a campaign to get the bridge reopened.

More about the bridge here.

The tramway headed south along what is now a very pleasant walk or cycle ride. 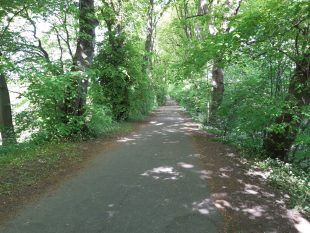 The land to the east is where the canal was to be built.

Originally there was a second stationary engine on this side. The tramway run a little to the east of its final course, or a flatter run, to the bottom of the incline, approximately where the steps lead down to. It was later decided the horses could pull the wagons up the slope, if it was not too steep. 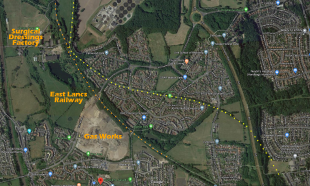 The tramway turned eastwards at a point that would later kiss the East Lancashire Railway. Just west of this was a mill that specialised in surgical dressing, but, as far as I can tell, neither the tramway or the railway had any connection to it, which is somewhat surprising. The mill, Vernon’s, closed relatively recently, and has only just been demolished.

The photo below is the remains of a bridge that passed under the ELR railway to the factory; the Old Tramway is behind you. 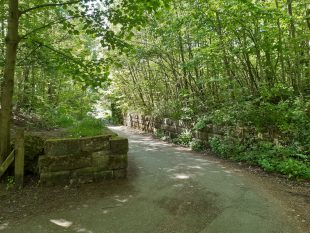 The tramway passes through what is now Walton Park, and is a cycle path, until it gets to Todd Lane North, at which point (see photo below) the footpath stops. 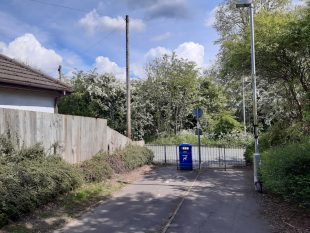 The route of the tramway can still be see as far as the A6, but becomes somewhat speculative as it heads south, skirting Walton-le-Dale. 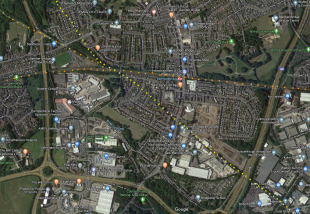 Not much remains of this section, but I guess the tramway went round the back of Danesway and Within Lea, but the section between them has been built over.

The East Lancashire Railway ran through Bamber Bridge from Blackburn, originally joining the ECML just beyond Lostock Hall, the lower route above, but later to their own station, via the upper route; the latter is now disused. The tramway went under the railway where these two lines diverged. There is a bridge there still today, on Meanygate, and it is called the Tramway Bridge, but the angle seems wrong for the tramway. 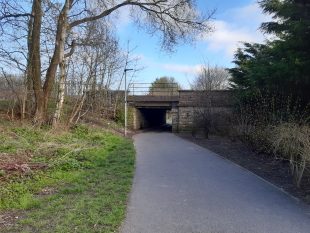 Although there is very little left of it, you can make out a line heading south east though a housing estate towards Station Road, in Bamber Bridge. The first 70 to 80 m has gone completely, but then there is a short section of footpath along the old course, which takes you from Edward Street to the appropriately named Outram Way. 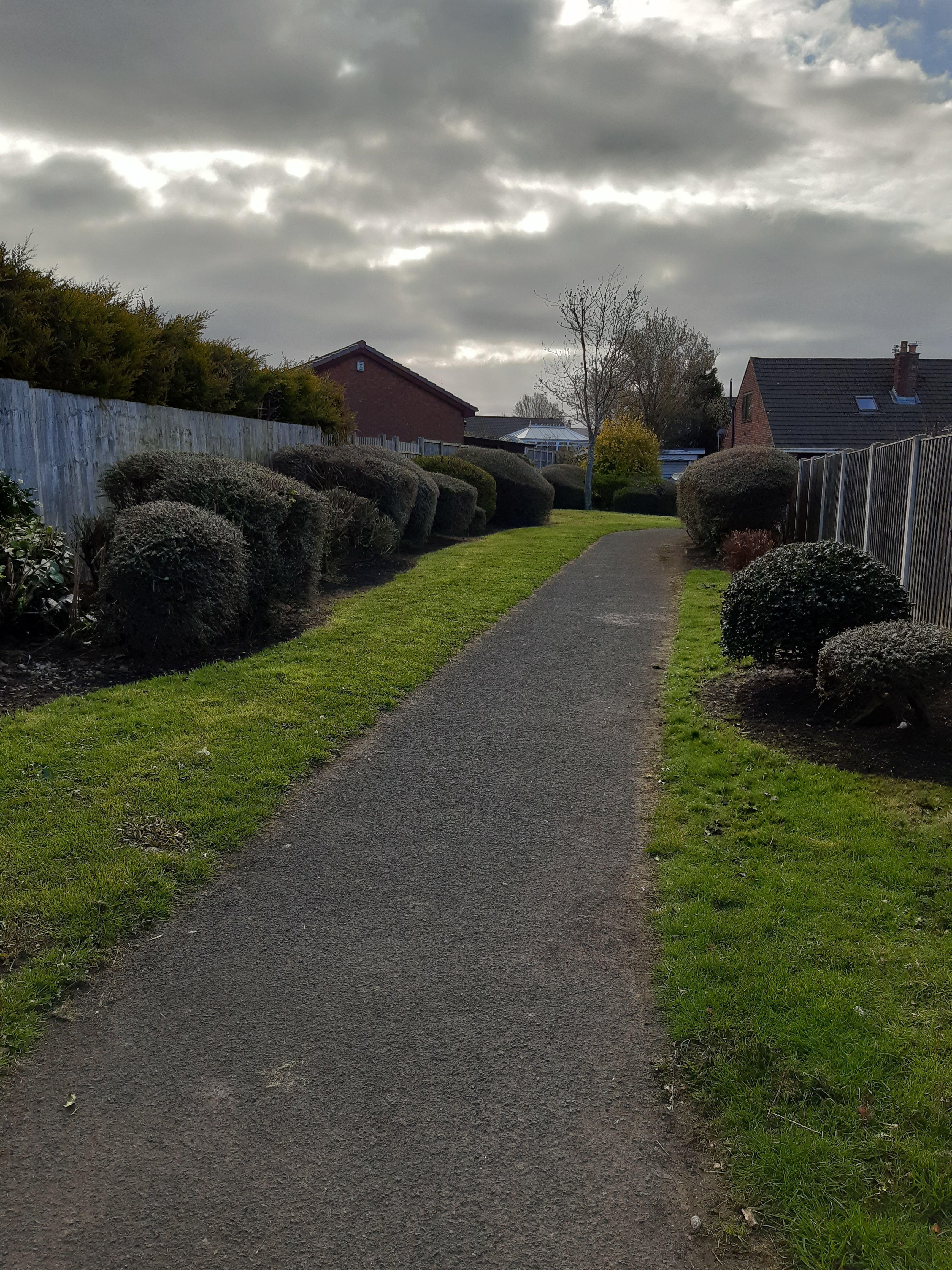 You can see the rest of the route to Station Road course on Google maps, but it is not accessible.

The image below is where it crossed Station Road, where the white vans are parked. It is not too clear in the image, but the left-hand wall of building has been built at an angle to accommodate the route. 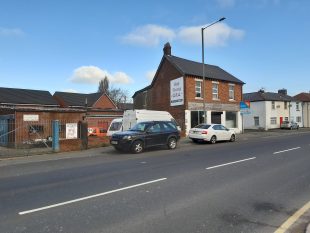 On the other side of the road there is not much to see, though the route can be made out in the satellite image. Across the M6, and a short section is very clear from Walton Summit Road. 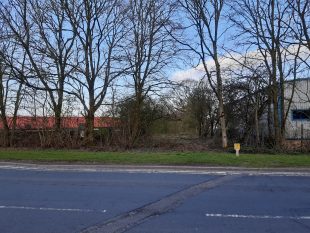 It is odd that so much has changed, and yet the course is still apparent. I would guess this is because of land ownership issues, and plots of land would be sold either side separately. 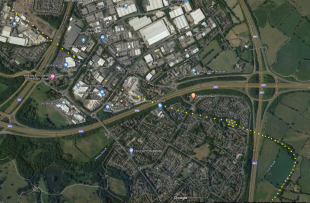 At this point the course of the tramway has been obscured, until beyond the M65, when we get to Clayton Brook Road, where it becomes a footpath again. I have to note that there is a Tramway Lane. There is no such lane in maps from 1930, and the lane does not follow what used to be the tramway. My guess is the current road dates only to the building of the M65. Did it previously follow the tramway?

This photo is from Clayton Brook Road, with Tramway Lane behind you, and is the last leg of the tramway as it heads up to the canal. 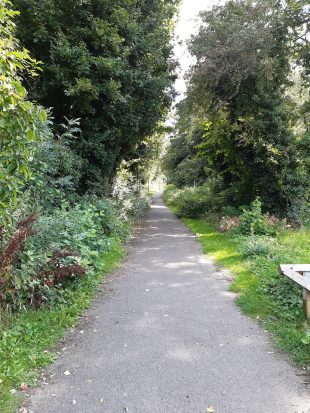 Just southwest of the junction of the M61 and M65 was the end of the tramway, and the start of the canal. There seems to be a large green space where this was; a canal basin with the tramway along both sides. There is housing all around it, so it is odd it has not been built over too.

The map snippet shows the layout, as in 1845. Crow Tree farm is still there, though no longer a farm. The M61 is about where the boundary crossed the canal. 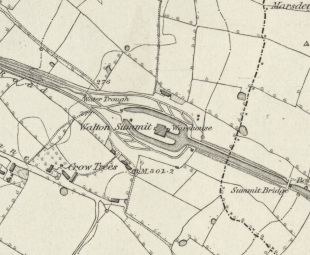 As the image below shows there is now quite a hump, which is unfortunate as clearly people play football on it now. 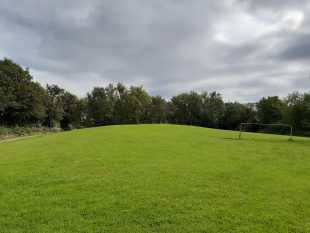 There is a path either side of the hump, and this follows the canal, which formed a Y. To the east, you can see where the two arms split. 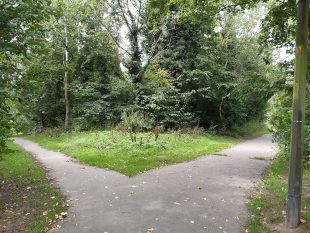 From here the canal headed east, the first little bit now a foot path, before going under the M61. It soon turned south, following the M61 to some degree. A short stretch at the very southern end is still useable where it joins the Leeds Liverpool Canal, but most of its length it is dry.