The Chronicles of the Preston Model Railway Society

The Chronicles of the Preston and District Model Railway Society

…it came to pass in the year 1958 that Robert the son of Richard Salisbury, a scholar at a place of learning which was in the road of St Vincent, brought home to his father a bulletin of news prepared by his teachers. Wherein it was said that one Desmond Roe, who was known as ‘the Caretaker’ and charged with the cleaning and security of the said place of learning, was minded to exhibit a model of a mode of transport known as ‘Railways’ at a great gathering of Hobbies and Pastimes in the Hall of the Public. For this model he used the products of the firm of Hornby and called ‘3-rail’.

This news was received with great joy by Richard who went to his friend Eric Bleasdale and said, “We too are interested in these models of railways, let us approach this Desmond and say we will help him”.

In the Hall of the Public a notice was displayed on the model railway enquiring if there were any among the citizens who would care to gather together to talk of model railways. And lo it came to pass that there were many, including one Michael, of a family of bicycle merchants, who said, “Let us form together a club and meet regularly to make and talk of such things away from our wives and others who scorn and do not understand”.  Thus a club was formed and it was named The Preston and District Model Railway Society and it began to flourish.

After only a short a time they in the Hall of the County who were charged with the teaching of children said, “Surely there are too few children at that place of learning and we will save many pennies if we move them to another place and knock down the building”.

This news was received with great sadness among the Brethren who said among themselves, “Where now shall we practice our skills, talk about gauge and wiring, count rivets and watch our trains go merrily round?” And this was the first time that the scourge of all such clubs – “The Premises Problem” was visited on Preston.

Then one among them who was not without a penny or two said, “I will lend sufficient to buy yon wooden hut which stands close by and we will move it to another place and have a place of our own in which to continue to gather”.

So it was agreed and after many months of scribing and negotiation with the might of British Railways a plot of land might be leased near the Dock line. Then the Committee sought for those of the Brethren who might lift and carry hammer and saw but sadly they found, as committees often do, that not all of the Brethren were willing to do more than play trains and talk and so the club withered and almost died.

Some, however, continued to practice in their own homes and kept in touch whilst making their purchases from one Jack Watson at his emporium known as “The Modellers’ Mecca” and in the year 1968 one of the Brethren came once more to Richard and said,” I have news of a room wherein we might meet again”. This news was spread abroad; the Brethren met again and agreed to rent the new found premises. Thus the club began to wax and flourish once more

The members, now grown much wiser from their time in the wilderness, set to work to make the storeroom of a former Co-op shop in Ashton Street into a clubroom. They agreed a rate of subscription to pay the rent. Monies for layout construction they sought from other sources. Raffles, competitions, jumble sales and the sales of refreshments all played a part. They threw the clubroom open and showed their skills to visitors on some weekends. This gained some donations and the membership increased.

A stout layout was built on timbers of 4” x 2” and shot bolted to the structure of the building. It was made to 00 universal standards with a branch line of a narrower gauge which is called 00/9, so that each could run his own trains. This was photographed for an article in “Model Railway Constructor” in Sept of the City’s (Guild Year), 1972. This time of plenty did not last for in 1975 the dreaded “Premises Problem” returned for the second time owing to redevelopment of the area and the layout was demolished as part of the building. Some newer Brethren had recently commenced to construct another layout of a half stature called N gauge but this too did not survive.

A former Unitarian Chapel in Percy St had passed into the ownership of the local council and therein were some rooms available to the Brethren. In the schoolroom they built a new 00 layout and in the next room one of N gauge named “Alston”. These premises were also used by a boxing club, a cactus and flower arranging group and a Latin Mass group. All in common used the kitchen. The cactus ladies soon grew tired of lumps of plaster from the ceiling of the kitchen falling upon their Norah Batty style headdresses each time they met and departed. The Latin Mass folk too went away and a Lapidary Society came in their place but did not long remain. A 009 layout named Tynn Godd was built in the vacated room. The smaller layouts were both exhibited and articles were published in Model Railway Constructor. Three exhibitions were staged in the gymnasium of what was then called “the Polytechnic”.

In 1977 the town twinning committee came to the leaders and said,” Our town has a twin town, which is called Recklinghausen, in Germany. There are among the citizens of that place those who also love model railways and we would wish you to make contact with them”. And lo a layout, which was called “Longridge” and had been bequeathed to the club by a former Brother, was taken by seven of the Brethren to the Ruhr for exhibition in the Ruhrfestspielhaus. The next year the Germans came to the Preston exhibition – now, because of the twinning connection, held in the Guild Hall. For the next two years the exhibition was also held in the Guild Hall but, without the kudos of the twin town connection, they in Guild Hall who were charged with the counting of beans said in the wisdom peculiar to accountants, “ We deem it better to receive no income at all rather than a little.” And the Exhibition was removed from that place.

“The Premises Problem” now visited once again for the old chapel was to be redeveloped. The fabric was indeed decaying at increasing rate and the doorway of the narrow gauge room was visited by dry rot in fearsome proportion like unto a triffid.

New rooms were found above a specialist carburetor workshop in St Peter’s old school, Cold Bath St. These rooms had been previously occupied for many years by a boxing club and the walls repainted each year. Thus the Brethren, whilst making the rooms suitable for their needs, removed layers of paint up to 1/2 in thick. Neither did the Heath Robinson electrics work for they had been rightly condemned. It was fortunate that there were among the Brethren those skilled to oversee the reinstallation of light and power.

The building had at one time suffered a major fire and a flat roof now replaced the original hipped roof. This was always a source of trouble for it leaked copiously even in moderately wet weather. For a short time the club also suffered from the windows being broken by vandals hurling stones. The Brethren replaced the glass with a double walled plastic material which resisted the damage and indeed bounced missiles back at the throwers discouraging them. In spite of all efforts these rooms could not be made really comfortable. For this reason only the most hardy of the Brethren remained faithful and the numbers dwindled.

Because of these problems the 00 layout was never brought to exhibitable condition but the substantial baseboards constructed at the second attempt now support “Bee Lane”. N gauge layout “Askam Knowt” and 0/16.5 “Grasmere” were constructed here and both were exhibited with articles published in the model railway press. In spite of several drenchings Askam Knowt’s baseboards are now – albeit in a somewhat undulating fashion beneath “Tellem Summit”. The construction of “Maudland Sidings” was started and 0 gauge layout “Thrutcholme” was built and an article published thereon in Railway Modeller.

During this time exhibitions were staged on an annual basis, in the first place in the Student Union and later in the Refectory of the University. A web site was founded to publish abroad the Society’s fame. However, the constant pressure from the University to acquire the building eventually succeeded in 2002 and the Society faced “The Premises Problem” yet again. Around this time the majority of 0 gauge membership separated to form The Preston O Gauge Group with their own premises.

Up to The Present

When the Brethren received notice that they were once again to be homeless a frantic search for new premises began. Experience told that a commercial letting was the only realistic option. Fortunately, the leaders had been wise and safeguarded funds over the years sufficient for this day they knew must come. Thus the Brethren were now able to take a 3-year lease of an industrial unit in Aqueduct Mill and, with only one exception, accepted a doubling of subscriptions to cover the new rent. Thus the Society’s continuing existence was ensured.

The 3 months before departure from Cold Bath St were spent in making the new found premises suitable as clubrooms, with those members who were free from other daily toil putting in a mighty effort. Partition walls were removed and all repainted. The new landlords (ladies) showed great indulgence even agreeing a reduced rental during this time. The Mayor of the City performed the opening ceremony.

The present premises have been found ideal. The comfort and greater availability of times of use attract an ever-growing membership, now numbering around 50. True to the principles adopted at the re founding of the Society subscriptions are set and reviewed to meet the rent. Utility bills are covered with the proceeds of the attendance “Honesty Box” and Brew room. Financing of layouts is met by income from the annual exhibition which is now held in the Sports Hall of Preston College, Fulwood Campus (the same site as the original premises). The recent construction of a Junior Layout keeping in operation the late Rev. John Hocking’s branch station has been most successful and bodes well for the Society’s continuing prosperity.

Richard, last of the founding brothers, is grown full of years in the service of the Brotherhood. He has taken his ease from the administration thereof and retired unto the brew room wherein he serves frequently and is now called “The Can Lad” and is honored by the Brethren. Young Robert, bringer of the first tidings, now has his own bus pass. 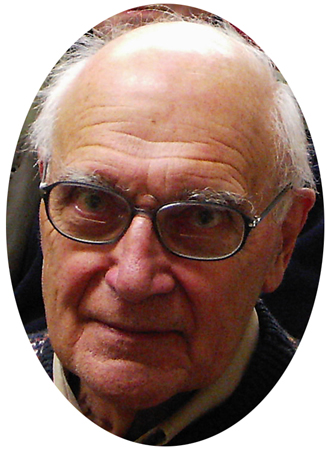 It with great regret that we must report the passing in June 2014 of our Hon. Vice President and Founder Member, Dick Salisbury. Dick was instrumental in the establishment of the Society and served initially as  Secretary and then as Treasurer following the rebirth in the mid 1960s. Always ready to help wherever needed,Dick will be remembered by everyone as a perfect Gentleman and by our newer members for his long service as “Can Lad” in the Brew Room.