Focus on Tank Wagons in the BR Blue TOPS Era

A lot of freight goes inside boxes which in turn goes inside vans, and you have no clue what is in there. The transport of bulk chemicals is quite different, as the nature of the chemical has an important impact on the wagon, and the owner has to be very clear exactly what is inside in case of emergency. The upshot is a wide variety of tank wagons on the railways of Britain, and as I have a background in the chemical industry, I have a particular interest in this area. Note that some of this is speculation; I have tried to note where. If you have information, please get in contact.

To learn about the rest of freight on BR in this era, see here.

Wagons carrying hazard chemicals in the era – and indeed today – were required to have hazard plaques, and there is more about them here, including how to make your own.

British Rail owned very few tank wagons at this time; the only ones I can find about are under the ZRx code, suggesting departmental use only.

Under the TOPS system, private owner tanks all come under the T category, and unlike most categories, these actually have some kind of system. TBx to TEx are bogie wagons, with the letter indicating the gross laden weight (GLW) in a 10 t band, from 70-79 for TBx to over 100 t for TEx. Two axle are similar, going from TRx (20-29 t) to TUx (over 50 t).

In this era, TEA and TTA were very much the norm – though there was a lot of variation for reach. This is reflected in the models available in N gauge:

Graham Farish do a TEA tank wagon and TTA.

Revolution do a TEA.

PECO do a TTA.

The Peco TTA kits, on the left BP phthalate ester wagons, on the right ICI petroleum, with custom transfers, as described here.

Milk wagons are a bit of an exception to the normal wagons, as they were typically passenger rated, and may have been considered NPCCS.

TMV are 3 axle milk tanks (TRV was used for two axle). The last two proper milk trains were from Fishguard and Penzance, both to Express Dairies at Kensington Olympia, and they both ended in 1981. Nevertheless, some were rebuilt in 1981 by the Milk Marketing Board for use was on a service from Chard Junction to Stowmarket; it lasted less than a year. They were retained for some years for emergence use if there was problems with road transport.

Dapol do a three wheel milk tanker, it is unlike the rebuilt version, but may be suitable for pre-1981 milk trains.

The star on some tank wagons indicates the speed it is rated to.

One star indicates suitability for an average speed of 35 mph, and was introduced in 1913, so would be considered fast freight at the time.

Two stars appeared much later, with the advent of better technology, indicating a wagon rated up to 60 mph. I think there was also three stars for passenger rated. The system fell out of use, possibly with the introduction of data panels in the late sixties, but the stars were still visible on older wagons for some years.

Milk wagons may have been excluded, possibly because they were passenger-rated; I have seen one image with three stars but most had none.

Class A and class B

Tank wagons are (or were?) classified as either class A or class B. Class A is suitable for flammable liquids, class B is not.

In the modern GHS system, there are four categories of flammable substance, from I to IV, with category IV not rating a symbol. It seems likely that the A classifications would correspond approximately to categories I to III, which is a flash point up to 60°C, though presumably was originally defined in °F.

The flash point of a liquid, by the way, is the lowest temperature at which it will ignite when there is a source of ignition just above, that is, in the vapour – it is the vapour that actually ignites. For simple organic compounds, containing only carbon, hydrogen and oxygen, it is typically 50 to 80°C less than the boiling point.

I believe the major difference between the two types of wagons was in the arrangement of valves. Class A tanks were designed to prevent the contents leaking out if a valve is not properly closed, which I think means no bottom discharged – the liquid has to be pumped out – but I am not completely sure here. If anyone knows better, let me know.

At one time class A wagons were pale grey, while class B were black, but I think that had pretty much disappeared by the seventies. The red sole bar for class A did persist.

Some tank wagons were lagged, to prevent them cooling and the liquid solidifying. Glacial acetic acid (i.e., without water) melts at 17°C; if you want to get it out, you need to keep it above that temperature. Their sheer size will mean it takes a long time for a wagon to cool, but the addition of lagging will keep the contents warm for the entire journey.

The lagging is a layer is of insulation that would probably have been asbestos and would look a bit like cotton wool, with a metal covering over the top to protect it. The metal covering is distinctive as it is clearly made up of different sections, and has hard edges, rather than the smooth, rounded edges of the tank itself, as this outer cover was not designed to hold pressure.

On that basis, I would suggest that these tank wagons are also lagged:
https://paulbartlett.zenfolio.com/trlacetonetta

See also the sodium wagons on this page; sodium melts at 98°C so would need to be kept above that temperature.
https://paulbartlett.zenfolio.com/ferryassociatedoctel

This image shows a modern lagged tank wagon at Preston dock, and again you can see hard edges and multipiece construction. This is for carrying bitumen, which is solid at room temperature.
https://commons.wikimedia.org/wiki/File:VTG_bitumen_tank_35_70_7790_017-7_at_Preston_Riverside.JPG

Some wagons may have a covering over the upper third of the tank, as can be seen here:
https://paulbartlett.zenfolio.com/bphexane

It is rare in the UK – the above were for international traffic – though it can certainly be seen on static tanks in the UK. The purpose is to protect the wagon from direct sunlight. The outer layout becomes hot, but the surface in contact with the chemical does not.

The term “liquor” is sometimes used on wagons. This indicates a solution, usually in water, I would expect at high concentration. It is an archaic term, but like many others, it persists in the chemical industry. Acetone is properly called propanone, and has been for many decades, but is still acetone within the industry.

The most peculiar instance I have come across is “nitrogen liquor”, as can be seen on some wagons here:
https://paulbartlett.zenfolio.com/fisonsammonia

The UN number indicates this is actually ammonium nitrate as a hot concentrated solution. On cooling the ammonium nitrate will crystallise, hence the need for lagging. I suspect “nitrogen liquor” was a term local to that process line at Fisons. Ammonium nitrate is used as a fertiliser to get nitrogen into soil; the chemical formula is NH4NO3, so it has a very high ratio of nitrogen in the salt. I guess it is called “nitrogen liquor” because the important point was the high concentration of nitrogen in the solution, but possibly also to distract from its potential use in explosives. It is certainly not a solution of nitrogen gas!

In bulk, liquids tend to be easier to handle than solids, as they can be pumped from one place to another. There are, or have been, various attempts to handle solids as fluids.

PresFlo is one such example. By blowing compressed air though a fine powder – cement in this case – it will act like a liquid, and can be forced down a pipeline. However, the powder is transported as a dry powder, and the wagons are therefore considered hoppers rather than tanks.

I am note sure if these are considered tanks or hoppers.

TIx are RIV tank wagons (RIV seems to stand for Regolamento Internazionale Veicoli; these would be tank wagons rated for European railways).

Size of the tank

To my eye, there is some variation in the diameter of the tank, and it seems to be related to the density of the liquid carried. Most organic chemicals (petroleum, methanol, acetone, etc.) have a density less than water, so the same weight needs a larger tank for the greater volume. Typically this seems to be a tank with a diameter greater than the width of the chassis, and this is right up at the loading gauge, so these wagons have ladders at the end, rather than the side, as seen in both the PECO and the Graham Farish TTA tanks.

In contrast, look at these wagons for ethylene glycol, with a density of 1.1 g/ml. The diameter is pretty close to the width of the chassis, leaving room for ladders to be fitted at the sides.
https://paulbartlett.zenfolio.com/icigseries

Chlorine wagons (density of 1.5 for the liquid) here again smaller, allowing room for the cover over the valves.
https://paulbartlett.zenfolio.com/icichlorinetta

This illustrates a further point, that a smaller tank size allows room for more on top. Wagons for phosphoric acid can be seen here. The density is 1.9, so higher again, and the tank diameter is smaller again, allowing for what looks like fold-down handrails on top of the wagons.
https://paulbartlett.zenfolio.com/albrightwilsonphosphoric

US tank wagons look quite different to UK wagons simply because the higher loading gauge allows room for handrails on the platform and more convenient valves and inspection manholes on the top.

There is also some variation is the length. Obviously bogie wagons are much longer. These TUA/TUB have a 20′ wheelbase, compared to what seems more standard 15′.
https://paulbartlett.zenfolio.com/tua

Older wagons had a 10′ wheelbase, but were pretty rare by this era.

The image below illustrates some of the differences. 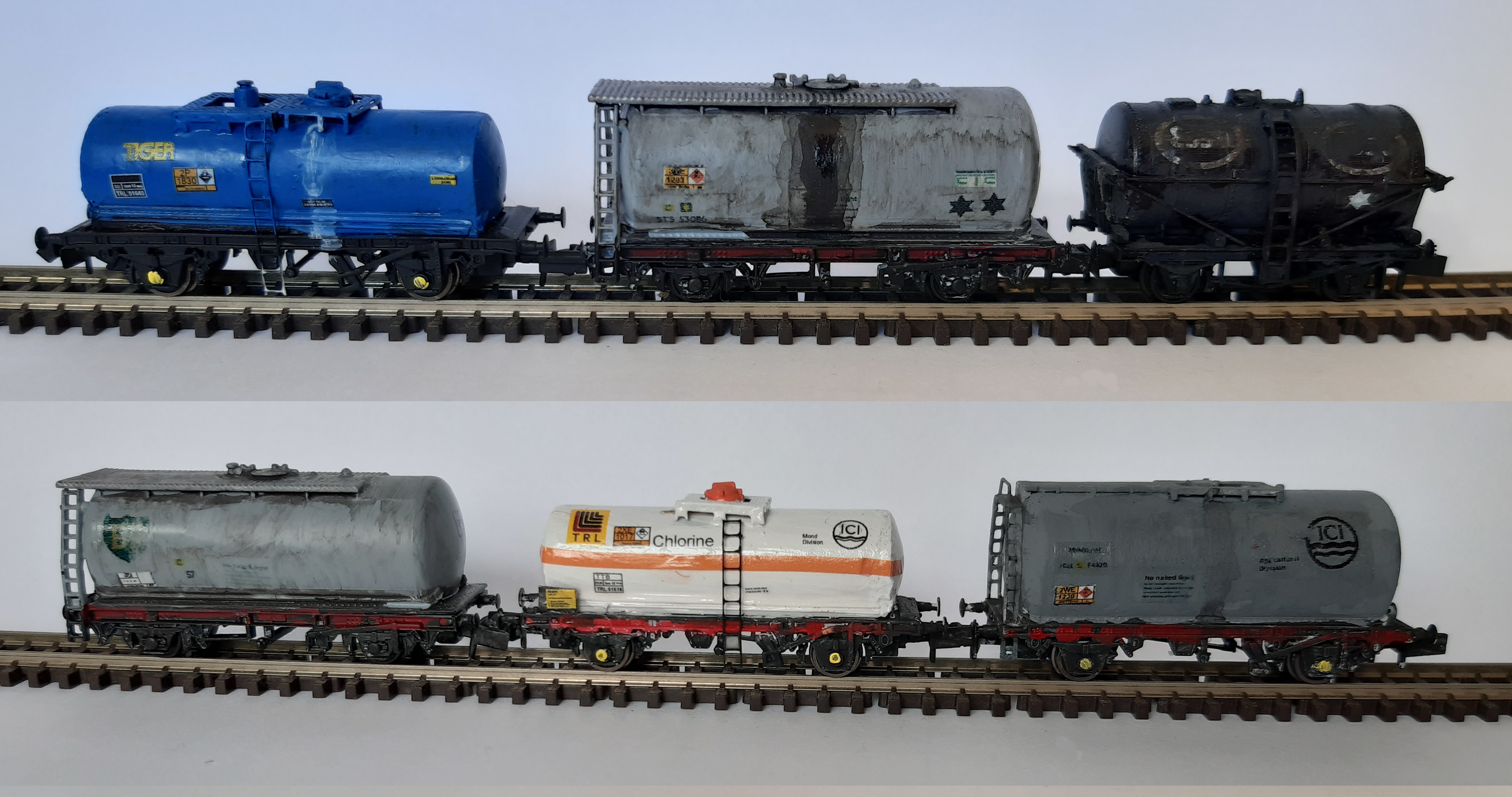 Top right you can see a short wheelbase wagon for tar, made from a Peco kit. Top left and middle bottom the tanks are standard length, but reduced diameter for higher density liquids, sulphuric acid and chlorine, both made from N Gauge Society kits. The other three are the more usual size for lower density liquids: petrol top middle; phthalate esters bottom left and methanol bottom right. The petrol and phthalate esters are Peco kits, the methanol tanker is a repainted Farish wagon.

Some Liquids Bulk Transported by Rail

These are the ones I am aware of; not necessarily all.